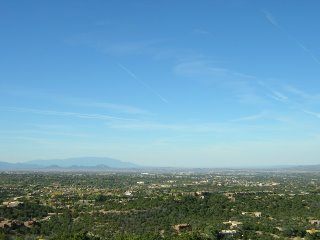 1. My new favourite idea
Last weekend, I went to Santa Fe, to be part of a working group meeting at the Santa Fe Institute on 'unifying current theories of ecology'. This comprised 15 researchers representing, broadly speaking, three of the main branches of macroecology: metabolic ecology, neutral ecological theory, and spatial macroecology (for which there isn't really a good link at the moment, but which involves trying to understand the geographical distribution of individuals and species across multiple scales, from fields to continents, as it were).

One idea behind the meeting was to try and find common ground between these models. For example, how do we incorporate information on body size — a cornerstone of metabolic ecology — into the neutral theory? How do we come up with an energetic theory of speciation, explaining evolutionary rates in terms of body size and temperature? If metabolic ecology could provide this, it would allow us to derive, rather than assume, one of the things that the neutral theory uses to calculate species diversities and abundances. In general there was a lot of talk along the lines of 'your theory's inputs are my theory's outputs'.

Another theme was to identify areas of ignorance, and what data are needed. Assuming anyone reads this, I don't want to talk too much about what the meeting concluded — and in truth, much of it seemed quite tentative — because there are publications in the works. But one of the things that excited me, because I've written (subscription required) a bit about it recently, was applying the theories of entropy to these problems. The two relevant models are of maximum entropy (technically known as MaxEnt) and maximum entropy production (MEP), which is different to, but derived from, MaxEnt.

Entropy is My New Favourite Idea. In some ways it's silly to rank concepts (although we do it all the time, of course), but entropy seems to me an extremely powerful and profound way of understanding the world — up there with natural selection, in fact. Even more so than natural selection, its roots are in logic, rather than in the analysis of any particular system. This means that it can be derived, and applied, in lots of different ways — and that it's possible to come up with rigorous mathematical proofs.

It also makes entropy an easy concept to misunderstand. It was only recently, for example, that I discovered that thermodynamics, statistical mechanics and information theory all have their own versions of entropy. Mathematically, these theories can be derived from one another, but I confess I'm still not sure how they relate, and differ. At Santa Fe, I decided I needed to know more about this, so I aim to track down some form of entropy for dummies.

2. Ummm…
I've also started doing publicity for what I like to call ITBOAH (pronounced 'itbo', 'itboa' or 'itbweagh', depending on how I'm feeling). First off, while I was in Santa Fe, I did an interview on Mary-Charlotte Domandi's show 'Radio Café', broadcast by KSFR, the town's NPR affiliate. This cool show comes live each morning from the Santa Fe Baking Company — Mary Charlotte just sets up her gear at a corner table, and gets broadcasting.

I also officially launched the book, to a small (apparently the town's wine and chilli festival was a bigger draw, for some reason) but appreciative crowd at Garcia Street Books, hosted by the shop's owners, the extremely kind and gracious Edward and Eva Borrins. Then, on Monday, I broke my journey home in Washington DC, to see the folks at my publishers, and took part in a Café Scientifique.

I've always told myself that once the book is out there, I've done my bit, and people can make of it what they will — it's not as if I can stand over a reader's shoulder and tell them what to think. When this actually happens, of course, it throws you off balance, but in a good way.

So what's been the most fun aspect of this experience is the questions that you'd never properly thought of and can't properly answer: 'What is energy?', 'If places with the most energy contain the most species, what about hydrothermal vents?'. Given a bit of time, I can kind of give a satisfactory response to these, but at the time, I find myself umming and aahing. The best thing to say is 'I don't know', but it's also the hardest thing — the urge to waffle is always mighty powerful.

3. Mathematical smackdown
Most of the best science journalism, if you ask me, appears not in the specialist press, but in places like the London Review of Books (declaration of interest: I occasionally do stuff for them), New York R of B, and the New Yorker.

For example, on my flight out, I found that, for some reason, they were still selling the 28 August issue of the New Yorker at Dallas airport (surely it doesn't take a month to get a copy into Texas?). I bought it, because it had a feature by Sylvia 'A beautiful mind' Nasar and David Gruber on the current controversy about the Poincaré conjecture. From reading other pieces, I had assumed that the Russian mathematician Grigory Perelman had solved it, and everyone was happy about that. But no.

I confess, after reading it I wasn't much wiser about what the PC is (something about the topological properties of spheres, I think), or how Perelman went about proving it. But it was a riveting read, and a superb piece of reporting. Perelman is, if not exactly a recluse, at least not bothered about giving interviews, refuses prizes, left America to move back to Russia, left his job in Russia to move back in with his mum in St Petersburg, and so on. But Nasar and Gruber got an interview by the brilliantly simple tactic of knocking on his door.

Perelman comes out of the piece pretty well. The person that comes out of it pretty badly is the Harvard-based Chinese mathematician Shing-Tung Yau, who has claimed that two of his students deserve the credit for solving the Poincaré. Yau is basically painted as an unscrupulous empire builder — stomping on those who disagree with him, claiming credit for things that he shouldn't, and not sharing things he should.

I was recently talking with a mathematician who knows people on both sides of the story, and he said paid the piece the tribute of saying that it contained information that was new to him. He also said that, allegedly, Yau plans to sue the New Yorker.

The same issue, incidentally, contained an article on stage fright, including the revelation that Carly Simon overcomes hers by getting band members to spank her shortly before she goes on stage.

At a celebration for President Clinton's fiftieth birthday, at Radio City Music Hall, in 1996, Simon, terrified of following Smokey Robinson, invited the entire horn section to let her have it. "They all took turns spanking me," she says.

You don't get that in New Scientist.
Posted by John Whitfield at 12:47 PM

Sorry, I'm several days behind on the comments front. In light of your mathematical smackdown mention, there's an interesting (to a non-mathematician like myself) commentary on what happens when a discovery doesn't work out... It's glossed here and here and the actual discussion is here...

Blue sky thinking, entropy and spanking - all in one post! Formidable. Encore.