A new Nature paper by Mark Achtman and his colleagues reminds me that today, Helicobacter pylori (Hp) is definitely my favourite member of the human gut flora.

This bacterium is best known for causing ulcers and increasing the risk of stomach cancer. Barry Marshall and Robin Warren won a Nobel prize in 2005 for showing this (famously, few believed that bacteria could survive in the concentrated acid of the stomach, but Marshall chugged down a load of Hp, and got an ulcer.)

But the bacterium is much more than just a baddie. Once upon a time, it was probably in everybody's tummy (although no one is quite sure how its transmitted — vomit seems like the most likely culprit). It's still very common in developing countries and east Asia, but in Europe and North America it's steadily declined — only about 20% of US residents under 40 have it.

A good thing, you might think. But some scientists, such as Martin Blaser, have suggested that there might be a cost to this decline, as well as the benefit of reduced ulcers. Hp reduces the level of stomach acid, so without it there seems to be more heartburn, and possibly an increased risk of oesophageal cancer. There's also the general unknown consequences of having a part of the human ecosystem go extinct: "We have no good sense of the microbial ecology of humans," says infectious-disease specialist Julie Parsonnet of Stanford University in California. "H. pylori infection revs up the immune system - what happens to our ability to respond to other infectious agents when that isn't there?"

Another thing people have argued about is how the bug got into us in the first place:

Most mammals seem to have their own species of Helicobacter in their stomachs, leading some researchers to suggest that the relationship between microbe and host predates the evolution of modern humans. But others think that H. pylori's hook-up with humans, and subsequent spread around the world, was more recent.

That's the view taken by geneticist Douglas Berg of Washington University in St Louis, Missouri. Berg and his colleagues looked at more than 500 strains of the bacterium taken from people in five continents. Native Peruvians had bacteria more similar to Spaniards, they found, even though their genes are more similar to those of East Asians - the group that settled the Americas about 12,000 years ago. This led Berg and his colleagues to suggest that the conquistadors may have carried the bacterium to South America about 500 years ago, and that the continent's first humans arrived with virgin stomachs.

Martin Blaser disagrees. A microbiologist at New York University, he believes that Helicobacter has long been part of the gut flora of all humans. Late last year, Blaser and his colleagues seemed to reaffirm the ancient origins of American H. pylori, when they discovered strains closely related to the East Asian version of the bacterium in native people living in remote regions of Amazonia. And in unpublished work, pathologist Marvin Allison of the Medical College of Virginia in Richmond has detected H. pylori in the stomachs of 1,800-year-old Chilean mummies. In areas where Europeans and Amerindians had mixed, Blaser believes, indigenous strains have fallen victim to microbial imperialism.

The new study seems to confirm that Hp has an ancient origin. Achtman's team had previously shown that the spread of different Hp populations in stomachs around the world reflect the patterns of human migration. Now, they have found that we and them match up on a global scale:

[G]enetic diversity in H. pylori decreases with geographic distance from east Africa, the cradle of modern humans. We also observe similar clines of genetic isolation by distance (IBD) for both H. pylori and its human host at a worldwide scale.

So basically, we've been carrying it since we were human. Achtman has this graphic showing how the two spread: 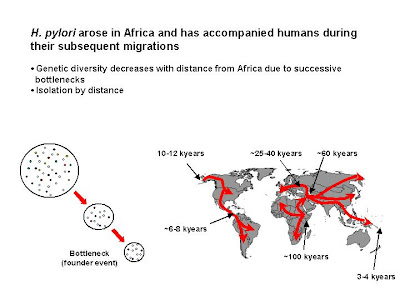 Those of you with Nature subscriptions can read a 2003 feature by me on all this (which is where the earlier quotes came from). And if anyone's looking to write a short, sharp popsci book, you could worse than tell the H. pylori story. Just remember to give me a cut of the royalties.
Posted by John Whitfield at 6:54 PM